A love of equipment lured Tom Stevenson away from a career on Bay Street and back to his father's well-known equipment rental company in Ontario, Canada.

Like his father before him, Tom relies on Ritchie Bros. to give him better access to the global marketplace.

Nobody combines the internet with the proven on-site auction method as well as Ritchie Bros. 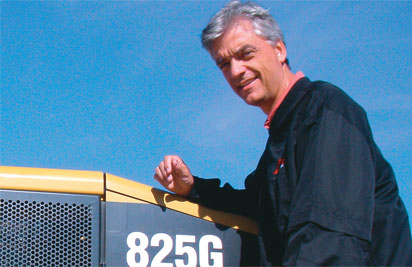 "When Ritchie Bros. does something, they do it right," says Tom Stevenson, president of Hub Equipment, a large independent equipment sales and rental company based in Toronto, Ontario. "You don't survive 50 years in business if you're not doing it right."

The same could be said of Hub itself. Tom's grandfather T.H. Stevenson established Hub in 1946. He sold the company to his son Verne – Tom's father – two decades later. After finishing college, Tom studied law and worked briefly in Investment Banking. But a love of equipment lured him back to Hub and, when Verne passed away in 2001, Tom assumed the reigns.

According to Tom, Hub's careful attention to the makeup of its equipment fleet has been integral to the company's success. Verne started buying and selling equipment at unreserved Ritchie Bros. auctions in the 1960s.

"Hub and Ritchie Bros. go back a long way," says Tom. "My dad was one of the first Ontario-based customers. He began buying at Ritchie Bros. auctions long before it was fashionable to do so. He came to be a loyal and consistent customer and attended over 200 Ritchie Bros. sales around the world."

That relationship continued when Tom joined Hub. The company has completed some significant strategic dispersals through Ritchie Bros., including a major realignment in 2000 when Hub sold more than 300 major pieces of late-model equipment at auctions in Toronto; Edmonton, Alberta; and North East, Maryland. "Each time we have worked closely with Ritchie Bros. personnel to achieve maximum value within their global marketplace footprint," says Tom. The Toronto auction was Ritchie Bros.' largest Canadian auction at the time – an impressive feat given the weather.

"There was a major blizzard and at least two feet of snow the night between the two days of the auction," Tom recalls.

"If Ritchie Bros. didn't have a state-of-the-art facility with seasoned

professionals trained to perform in adverse conditions, they wouldn't have been able to conduct the sale in such an admirable fashion. The bidders stayed comfortable in the indoor heated theater – and the more comfortable an on-site bidder is, generally the better the end result."

Tom appreciates Ritchie Bros.' internet bidding service as a buyer – for the convenience – and a seller – because it brings the global market to the auction. But he thinks nothing will replace the excitement and event-driven atmosphere created by the on-site auction event.

"There are competing auction companies, some online, some conventional, but nobody combines the internet with the proven on-site auction method as well as Ritchie Bros.," Tom says. "In terms of realizing the highest value for your equipment, your chances are best with Ritchie Bros. People bid with confidence because they know Ritchie Bros. auctions are true unreserved auctions, that no bid-ins are allowed and that everything is sold with clear title. Ritchie Bros. doesn't leave anything to the imagination. They have a systematic proven approach that nobody has been able to replicate or really compete with on a global basis."

Hub Equipment has been a Ritchie Bros. customer for more than 40 years – and Tom believes he'll continue to use Ritchie Bros. auctions to help him manage Hub's fleet of rental equipment.

"We've had an extraordinary relationship with Ritchie Bros.," says Tom. "It has been a pleasure to deal with competent professional people who have fun at what they do and needless to say are very good at it."