NPL Construction had locations across the U.S., each with its own approach to equipment turnover.

Looking for a more efficient way to sell millions of dollars of surplus assets, NPL turned to the leaders in the business – Ritchie Bros. Auctioneers.

Selling through Ritchie Bros. is the easiest, simplest way of extracting maximum value from your assets. 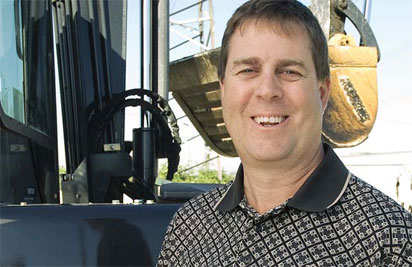 Established in 1967, Arizona-headquartered NPL Construction Co. is a recognized leader in energy distribution construction in the United States. When Tom Kramer joined NPL as Director - Strategic Sourcing in 2000 after 10 years working for a Caterpillar dealer, the company had an opportunity to standardize its approach to equipment disposal. "We had 18 or so regional business units at the time, all operating independently, disposing of millions of dollars of equipment each year in various ways. It was an inefficient effort."

Outsourcing their disposal needs was the logical approach. "Selling equipment is not a core competency of a construction outfit; it is the core competency of an industrial auctioneer," says Tom. "The simple way to dispose of your iron, when you're spread out from coast to coast, is one consistent process. You need someone who can handle all types of iron, everything from a trailer to a compressor to a load of fuel tanks to excavators. Who can do that from coast to coast? Well, Ritchie Bros."

NPL signed an exclusive national contract with Ritchie Bros. in 2000, and now sells over 1,000 pieces of equipment every year at Ritchie Bros. auctions across the United States. For NPL, the benefits were immediately apparent: strong returns on the sale of equipment; a consistent, well-defined approach to equipment disposal; and certainty.

"The cost of carrying a non-performing asset is significant," says Tom. "One of the things that was a huge benefit to me at NPL was the certainty of the auctions. We would start committing gear 30 days or 60 days in advance of the auction. Ten days before the sale, you send your equipment to the auction and then three weeks later you've got your check. Well, that's a pretty good turnaround, from a capital perspective."

Now President and CEO of Surrey, British Columbia-based Canadian Utility Construction, Tom continues to buy and sell equipment at unreserved Ritchie Bros. auctions. "To me, selling unreserved is what makes Ritchie Bros. a great success. That commitment, and the great selection of equipment, brings in the buyers. Selling through Ritchie Bros. is the easiest, simplest way of extracting maximum value from your assets."