Robert and James Wright started out with just one bulldozer; their Tennessee construction company now has about 300 pieces of equipment in its fleet.

Whether they're buying one dozer or selling hundreds of machines, Robert and James turn to the people they trust.

Trust and character go a long way. We feel like we're in good hands with Ritchie Bros. 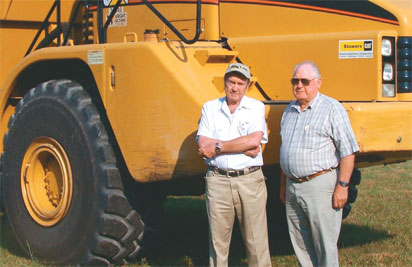 Robert and James Wright grew up in a farming family in middle Tennessee during the Great Depression. In 1961, they borrowed a little money from their dad and purchased an Allis Chalmers HD11 bulldozer. "We started out doing farm work for our neighbors; whatever they wanted done," says Robert. "We did our first state job in 1965 and after that we just grew a little bit each year."

Still based in Charleston, Tennessee, Wright Brothers Construction now employs 300 people and runs a fleet of up to 300 pieces of heavy equipment. The company has completed major construction projects across the southeastern U.S., including highways, malls and subdivisions. "We're proud of what we've built," says Robert. "We've had a great ride."

The Wright brothers attended their first Ritchie Bros. auction in the late 1980s, when the company started conducting auctions in Tennessee. "We were well pleased with Ritchie Bros. auctions right from the start," says Robert. "We feel comfortable that every bid is a real bid. There are no reserves and the sellers aren't bidding. It's straightforward; you know you're not being messed around. That's very important to me."

At first, Robert and James just bought equipment at Ritchie Bros. auctions, but they soon started selling their surplus stock too. "We buy a mix of new and used equipment, depending on what's happening," says Robert. "We don't have any certain time to turn it over. It all depends on whether we've got a lot of work on the books. Some years we buy and sell more than others."

In 2003, the company had a lot of idle equipment in its fleet. "We decided we needed to turn that equipment into cash – and we did!" says Robert. In September 2003, Ritchie Bros. conducted a one-day auction at the Wright Brothers' site, selling almost US$12 million of equipment from 22 different owners, including nearly US$8 million from the Wrights. The unreserved auction attracted hundreds of bidders from 42 U.S. states and nine other countries.

Ever since they became Ritchie Bros. customers, Robert and James have had the same sales representative. "Julian is a very reputable person," says Robert. "You can trust what he says; he doesn't try to lead you down an empty path. Working with people you feel like you can trust is very important to us. We've been real pleased with everyone at Ritchie Bros. I think they look for people with character – people like Julian. Trust and character go a long way. We feel like we're in good hands with Ritchie Bros."

"We feel real good having family take over. They've been trained well and we trust them. The business is in good hands. James and me: we're just names now – but I like to stay busy, so I help out where I can. It keeps me out of trouble," he laughs.