In 1964, the Podolinsky family opened a John Deere dealership in Petrolia, Ontario to sell and service equipment for their neighboring farmers. In 1985, they started hosting a mini-trade fair on site at Podolinsky Equipment.

Ritchie Bros. is so organized. Once I told them what we wanted, they took care of everything. 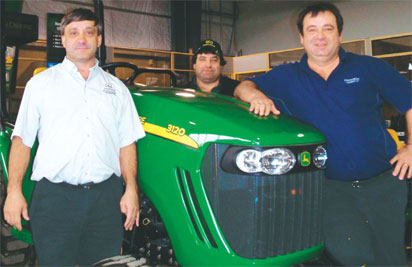 In 1964, when Ludvik Podolinsky learned that his local farm equipment dealer was retiring, the Ontario farmer saw an opportunity to fill the void. Ludvik and his wife Anne opened a John Deere dealership in nearby Petrolia and began selling and servicing equipment for their fellow farmers in Lambton County.

At first the Podolinskys had just one employee, a mechanic, but their three young sons – Rick, Louie and Dave – would get off the school bus and come straight into the store. Today the brothers are equal partners in the 1,900-acre Podolinsky farm and thriving John Deere dealership. "Because we're farmers ourselves we've known how to adapt the equipment business to the new farming practices," says Rick. "The farm and the dealership go hand in hand."

Still situated in Petrolia, Podolinsky Equipment now employs more than 50 people and sells a diverse range of new and used John Deere and other farm equipment, as well as Arctic Cat snowmobiles and ATVs. Their father passed away almost 10 years ago "but mom is in here every day, still working," says Rick.

In 2007, the Podolinskys invited an auctioneer to participate in Farmer Information Days for the first time. "We thought an auction would supplement the exhibits and provide a different avenue for our customers and other dealers in the area to sell their excess inventory," explains Rick. "We've sold a lot of surplus equipment at auctions in the past, but we'd never sold through Ritchie Bros. But you've got to go where the market is and today the market is worldwide. Ritchie Bros. is a worldwide auction company; that's why we invited them."

Ritchie Bros. sold over 250 items for Podolinsky Equipment and other owners at that first auction, including tractors, headers, balers and seeding equipment. More than 550 people registered to bid in person or online; buyers came from across Canada and the U.S., even overseas.

"The auction was a great success," says Rick. "Ritchie Bros. is so organized. Once I told them what we wanted, they took care of everything. They came in a couple of weeks before the auction, set it all up, sold everything and settled up afterwards. It all went off without a hitch. Prices were good and the auction brought a wider array of customers into the dealership."

In December 2008, Ritchie Bros. is returning to Petrolia for its second Farmer Information Days auction. Rick plans to watch the auction online at rbauction.com. "I'll wander back and forth between my office and the auction. I'm not going to stand out there for six hours!" he laughs. "I can't bid anyway because you can't bid on your own equipment at a Ritchie Bros. auction. I like that policy. It makes it fair for the buyers."

Although he's looking forward to the 23rd annual Farmer Information Days, Rick admits that he hasn't thought much about the auction.

"I've been so busy with the farm and the store that I haven't really thought about it since we signed the contract," says Rick. "I'm sure the auction will go well. Ritchie Bros. knows what it's doing. I always say: if you're not confident, don't do it."