[Ritchie Bros.'] auction brochures are sent to buyers around the world to ensure the success of the sale is not completely reliant upon local bidders. 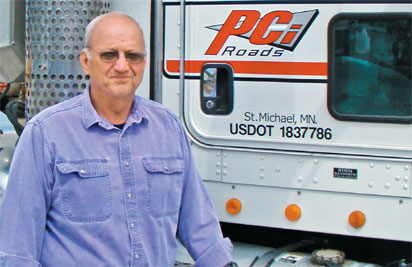 "Ritchie Bros.' advertising is one of the main reasons we sell through them," Neil says. "Their auction brochures are sent to buyers around the world to ensure the success of the sale is not completely reliant upon local bidders."

Neil has been working full time in the construction industry for nearly 30 years, although his first career was in education. During his 10 years as a public school teacher Neil spent his summers working with Progressive Contractors in Minneapolis. He joined the company as a full-time dispatcher in 1980, taking over the position of equipment superintendent in 1984.

When Progressive Contractors stopped doing construction work in early 2009, Neil and many of his co-workers joined PCI Roads, which is owned by some former Progressive employees.

"We are a new entity, but with the same people," Neil says.

"I have dealt with other auction companies and I think Ritchie Bros. is the most reputable," Neil says. "Their terms are more understandable, they do a great job with advertising and their sales are always run with honesty and integrity."

Neil didn't go home empty handed from that first auction: he purchased a couple of utility trucks – and he's been a steady Ritchie Bros. customer ever since, not only as a buyer but as a seller.

As a buyer, Neil values the integrity of Ritchie Bros. auctions above all. As a seller, he appreciates the global advertising and access to a broader market he gets through Ritchie Bros. – and the high level of service he receives from Jeremy, his Ritchie Bros. representative.

"Jeremy always makes sure I know when the auctions are coming up, ensuring to notify me of the deadlines for advertising," Neil says. "Our company leadership is not centralized so sometimes it takes a while to make a decision about what equipment to put into the sale. A lot of times we decide right at the deadline and Jeremy always comes out to take pictures and put the list together so we can get into the auction brochures."

And, with the downturn in the U.S. economy, getting photos of PCI Roads' surplus equipment into a Ritchie Bros. brochure and related email notifications – and into the hands of tens of thousands of people around the world – has never been more important to Neil.

"The advertising and online bidding service provided by Ritchie Bros. brings people together who are in the market to buy," Neil says. "It's important to have a global marketplace, especially when local markets are fluctuating. That's why we sell through Ritchie Bros."