When it came time to retire they chose to sell their equipment with Ritchie Bros. because their auctions are easy and pain free

I have no worries selling with Ritchie Bros. whatsoever and I would do it again in a heartbeat. 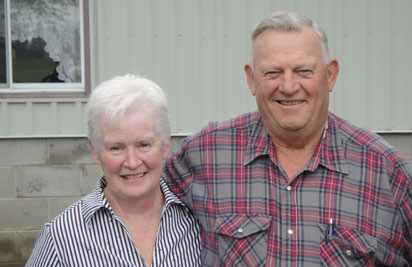 John Duivenvoorden immigrated to Canada from Holland with his family in 1952—he was seven years old. Thirteen years later he married his wife Pat and together they built JPD Farms, which still operates today.

"I have always had a farm; I come from a farm," says John. "However, it was pretty tough to make money farming in Canada in the 1970s. We had to tighten our belts and find some money elsewhere, so my wife and I started a construction company to help pay the bills."

"I started with absolutely nothing," says John. "Today JPD Farms owns land from Alberta all the way through Ontario. Everything I have built was done with me and my wife."

Along the way John managed his equipment fleet by purchasing anywhere he could find a good deal—he wasn't particular to a specific dealer or auctioneer. He was first introduced to Ritchie Bros. in 1990 and sold a bunch of equipment with the company that year. Since that time he has sold and purchased equipment at various Ritchie Bros. sites around North America—from Edmonton, AB to Orlando, FL.

"Anytime I have ever dealt with Ritchie Bros. they have always done exactly what they said they would," says John. "They take care of everything. I have been to other auctioneers and two weeks later there is equipment still sitting on the seller's property waiting to be picked up.

With Ritchie Bros. I don't have to worry about any of that. All the equipment is on their property and they make sure when a guy comes to pick-up they are there to facilitate the load out. I have no worries selling with Ritchie Bros. whatsoever and I would do it again in a heartbeat."

In 2012 John and Pat decided to retire and sell all the equipment owned by JPD Farms with Ritchie Bros. They still own farmland across Western and Central Canada and sharecrop that land today.

"I'm pushing 70 and I don't get around like I used to," says John. "So, when it came time for me to sell my equipment I wanted it to be easy and pain free and that's exactly what Ritchie Bros. provided. Before they came out to see my equipment I did my homework, I knew what the equipment was worth and it turned out Ritchie Bros. had the same numbers I did. I said, ‘get out the contract and sign me up'."

Even in retirement John and Pat have ensured their family empire continues to grow. Their son is President of Duivenvoorden Haulage Ltd. while their daughter and son-in-law have founded another company called Chalmers Construction. And with 14 grandkids already, the Duivenvoorden empire has a long history yet to write.