For years, Hydro Quebec sold all of its heavy equipment directly to buyers in the local market.

When you have thousands of people at the auction, from all over the world, you know that the price you get is the best price in the market. 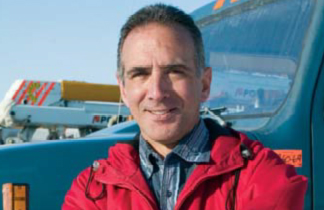 Being responsible for the Investment Recovery program of Hydro Quebec, Jess Alcala understands that every decision he makes is made on behalf of more than seven million people living in the province of Quebec, Canada.

A government-owned corporation that generates, transmits and distributes electricity for the province, Hydro Quebec has annual revenues in excess of CA$11 billion and a fleet of heavy equipment numbering in the thousands. To maintain the efficiency and productivity of its fleet, each year Hydro Quebec replaces four or five hundred pieces of heavy equipment.

"We have equipment in more than 300 different locations around the province," says Jess. "For a long time we used to centralize our surplus equipment in 14 or 15 locations, calling for tenders and putting out ads when we had equipment to sell. We spent a lot of money on advertising and then had all kinds of people coming to look at the machines. It was labor intensive and costly."

Recognizing the potential to increase efficiency and reduce expenses, Hydro Quebec began exploring other options – including auctions. The corporation initiated a pilot project in 1996, consigning equipment to Ritchie Bros. in Montreal, and also to a competitor's auctions. Jess soon discovered the difference made by the global market.

"We got better results with Ritchie Bros., because of the reputation of the company and the international audience of bidders," says Jess. "When you have thousands of people at the auction,

from all over the world, you know that the price you get is the best price in the market."

After the "very successful" pilot project, Hydro Quebec signed a long-term contract with Ritchie Bros., and has since sold all of its heavy equipment exclusively through the Montreal auction site. Once constrained by the needs and demands of local buyers, Hydro Quebec now enjoys the benefits of the global marketplace that Ritchie Bros. creates. In addition, the regular auction schedule enables the corporation to plan ahead, reduce costs and improve efficiency.

After 10 years as a Ritchie Bros. customer, Jess still enjoys attending the auctions with his staff.

"The atmosphere is exciting and the people treat us very well," he says. "We're very satisfied with the service we receive and the prices we achieve. I have no problem selling unreserved: it's what brings in the buyers. The more people you have at the auction, the better the results. That's why we sell with Ritchie Bros."