When looking for a company to manage the sale of its equipment, Saiia used two criteria: resources – and values.

There are a lot of unknowns in the world; working with Ritchie Bros. is not one of them. 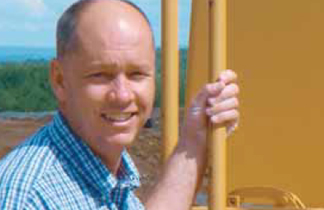 In 1946 Sam Saiia – the New York born and raised son of a civil contractor – saw the potential for growth in Alabama and established the Birmingham Excavating Company (BEC) to help level the land for development. As BEC grew over the years, it went through many ownership changes: going public in 1989, merging with another public company in 1997 and finally going private again in 1999 as Saiia Construction.

"We didn't see ourselves coming back private, but it was a better fit for our customers and employees," says Frank Montgomery, one of Saiia's three owners along with Jody Saiia – Sam Saiia's son – and Donald Stansberry.

Today Saiia Construction specializes in large heavy construction projects for commercial and industrial sites, including mines, paper mills, power generation sites, offices, malls and landfills. It has annual revenues in excess of US$100 million, 520 employees, operations in 10 southeastern states and a fleet of more than 400 late model machines.

Since Frank joined Saiia in the mid-1990s, the company has doubled in size, a rate of growth that has presented challenges as well as opportunities. "As a larger company we've needed to become more structured," says Frank. "When I came over a lot of people had their hands in equipment disposal. It was very inefficient. At that point we decided we wanted to formalize the disposal method for our surplus machines."

Saiia established an equipment center at its head offi ce in 1996; seven employees now take care of the company's equipment buying and selling needs. Maintaining an average fleet age of less than five years is a key Saiia commitment – as is adhering to a set of values that emphasize integrity and treating customers and employees with fairness and respect.

"We have a very strong culture and ethical sense at Saiia," says Frank. "When looking for a company to take care of our equipment disposal, we decided we wanted to associate ourselves with a strong organization that had a similar set of values and sufficient resources and options to react as we saw fit. We wanted a partner that fit with our company."

It wasn't difficult for Saiia to choose Ritchie Bros. "We made our decision based on reputation," says Frank. "And in 12 years we have not been disappointed. We have high expectations and Ritchie Bros. consistently meets those expectations. They give us the best exposure for our equipment. They attract a good audience to every auction. They are always straight up with us. There are a lot of unknowns in the world; working with Ritchie Bros. is not one of them."

Over the past dozen years, Saiia Construction has sold millions of dollars of surplus equipment through Ritchie Bros. – its exclusive auction provider.

"Based on years of experience we've come to trust Ritchie Bros.," says Frank. "From my perspective as a seller, it's important to choose an auction company that's going to get the buyers there and Ritchie Bros. always does. People know the rules – it's fair, it's unreserved – and that's what draws the audience."

Despite recent economic uncertainty, Frank remains optimistic about Saiia's future. "We're an organization that is set up to deal with the challenges that are before us," he says. "If you're sound and you run your business right, there'll always be opportunities down the road." And if taking advantage of those opportunities means buying or selling equipment, Frank expects that most of that business will be done through Ritchie Bros. "I can say with certainty that we've found our auction company," he concludes.