Like his father Vernon before him, Duane Semon runs a family owned and operated equipment rental company in Phoenix, Arizona.

Duane is also a loyal Ritchie Bros. customer - just like his dad.

The company has stayed friendly and personal – and we still get the same service we did 20 years ago. 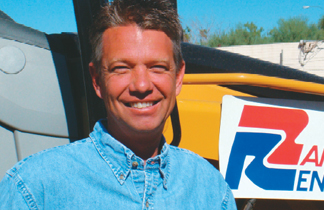 In 1964, after Vernon Semon's father passed away, his mother gave him a share of the inheritance with one piece of advice: buy yourself a business. Just 21 years old, Vernon did as his mother suggested – first trying his luck with a gas station and then buying a small equipment rental business in Phoenix, Arizona.

When Vernon bought Rainbow Rentals, the company specialized in light industrial and landscaping equipment: lawnmowers, small tractors, tools. Over the coming decades, Vernon expanded and diversified the rental fleet to include smaller construction equipment items such as backhoes, forklifts and trucks. His son Duane came to work with him in the 1980s. When Vernon passed away in 2001, Duane took over the business.

Today, Rainbow Rentals has nine employees and about 50 pieces of construction equipment in its rental fl eet, as well as hundreds of smaller items. Duane's sister and niece work with him; his wife, mother and son help out from time to time. "We're a real family business," says Duane.

The relationship between the Semon family and Ritchie Bros. began in the late 1980s. "We had some excess equipment to sell," says Duane. "Jim Cox came down to the yard and talked to us. That's when we started selling our surplus equipment through Ritchie Bros." Twenty years later, Jim is still the Semons' Ritchie Bros. representative.

"Jim is a pleasure to work with," says Duane. "He takes care of us. We're not a large account for him, I'm sure, but he makes us feel important and respected. We trust his advice. Everyone at Ritchie Bros. is very honest and professional – that's the main reason we do business with them."

Duane has attended "pretty much every Ritchie Bros. auction in Phoenix over the past 20 years," he says. "Sometimes I go to buy, sometimes we're selling, but often I go just to see where the market's at, to see what things are selling for. When you're in the rental business it's good to know what's going on, what's in demand. Ritchie Bros. auctions are a reflection of the market."

When Duane first started attending Ritchie Bros. auctions in Phoenix, bidders sat on plastic chairs under a shade canopy. "The change over the past 20 years has been pretty impressive," he says. "Now we've got this amazing facility with stadium seating. It's much more comfortable for bidders and it feels less temporary, which gives you confidence when you're selling. You know this isn't a flyby- night operation."

"Selling unreserved doesn't worry me at all," he says. "Ritchie Bros. always does a good job of bringing in the bidders and that's what brings in the good prices. Jim told me long ago: don't focus on the individual items, Duane is also a loyal Ritchie Bros. customer - just like his dad. look at the aggregate. That has pretty much always rung true. When you look at the total, it's always right where you think it should be or better. We've never had a bad experience on a package of equipment."

Duane still enjoys auction day – even though he's attended literally dozens of auctions over the past two decades. "Ritchie Bros. auctions are fast-paced and exciting – a lot more fun than you'd think," he says. "My kids like coming with me, seeing all the equipment run over the ramp. It's pretty neat. I think Ritchie Bros. has done a good job of keeping pretty much the same, despite the growth and the expansion. The company has stayed friendly and personal – and we still get the same service we did 20 years ago."