Miller Farm Equipment has been selling new and used farm equipment to Canadian farmers since 1924. Doug Heritage and Kevin Miller now operate one of the largest Case IH dealers in North America.

It's clean and tidy for the buyers, and it's a done deal for the sellers. It's a true blue auction. 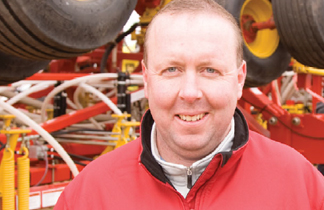 Since J.W. Miller opened the first Miller Farm Equipment store in 1924 in Saskatchewan, Canadian farmers have enjoyed times of plenty - and survived times of need. Demand for used farm machinery has fluctuated similarly. In the decade that Doug Heritage has been with Miller Farm, he's noticed a dramatic change in the local ag equipment market.

"The land base is still there but we're dealing with fewer farmers every year," he says." The large farms buy new equipment, give it little downtime and replace it often. Because there aren't as many farmers buying used equipment, you have to look to the global market when it's time to sell."

Miller Farm has grown by "leaps and bounds" since 1924, with four generations of the family taking ownership successively. Now co·owned by Doug Heritage and Kevin Miller- great-grandson of J.W.- Miller Farm is one of the top five Case IH dealers in North America, with six locations in Saskatchewan and Manitoba, 120 employees and $120 million in annual sales. Kevin's son Jason works for the company during university break. "It's amazing to see that kind of continuity and longevity in our industry," says Doug. "It's somethingto be proud of."

In the 1970s, Miller Farm starting using auctions to sell surplus inventory. "We take equipment on trade when we sell new equipment." explains Doug. "For many years Miller Farm used local auction companies to help sell any used equipment that sat unsold for too long. It's not for cash flow; it just keeps the system clean."

Seeing the local market for used equipment getting tougher, Doug and Kevin took a harder look at their disposal options. They knew they needed to reach buyers from other regions.

"We switched to Ritchie Bros. for a few reasons," says Doug. "Their professionalism, their global reach and their flexible contract options-but mostly the unreserved policy. A buyer coming to a Ritchie Bros. auction knows that every piece of equipment is going to sell, regardless.

They know that everything is lien-searched and there are no bid-ins or buy backs. It's clean and tidy for the buyers,and it's a done deal for the sellers. It's a true blue auction."

With the Canadian agricultural industry enjoying boom times right now, the market for used equipment is stronger than it's been in years. But Doug thinks Ritchie Bros. auctions will continue to play an important role in Miller Farm's inventory management, regardless of industry market conditions.

"Ritchie Bros. auctions are one of the best avenues for selling surplus used equipment that the local market can't absorb," he says. ''When we sell through Ritchie Bros. we reach a wider market. The first time we did it, some people wondered why Miller Farm was selling millions of dollars of equipment at an auction. It raised some questions. Then we kept doing it and now people seem to look forward to it. It's actually created a stronger name for Miller Farm Equipment."