Donald Collins first started buying equipment at Ritchie Bros. auctions when he established his own pipeline construction company in Arkansas.

When he retired, Donald chose Ritchie Bros. to take care of his equipment - and sell everything in one day.

If I had to sell all this myself, it would take me five years! 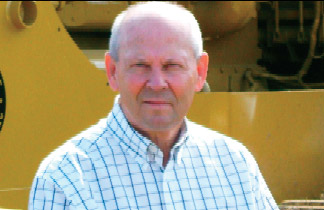 Retirement: it's a scary thing for a lot of people, but Donald Collins of Bald Knob,Arkansas was ready for it.

"I've worked my whole life," says the 66-year old."I'm not worried one bit. I'm looking forward to hunting and fishing and just watching the water flow."

In 2001, after decades working in the cable industry, Donald started his own pipeline business: Collins Pipeline Construction. He attended his first Ritchie Bros. auction in Fort Worth,Texas in 2002, when he needed some side booms.

"I was just starting out," says Donald."I was very impressed with the layout,the facility and the way Ritchie Bros. conducted the auction. I'd been to a lot of other sales but this was the best I'd ever seen.That impression really stuck with me. From that time on, whenever I needed equipment, I went to the Fort Worth and Houston Ritchie Bros.auctions."

So, when it came time to retire, Donald didn't have to do too much research; he knew who to tum to. "A lot of other auction companies wanted to conduct this sale," he says,"but in my mind, Ritchie Bros. was the only way to go." Ritchie Bros. conducted a complete dispersal for Collins Pipeline on Donald's property in Bald Knob, Arkansas in August 2008.

"It's amazing how professionalmy yard looked," says Donald. "The guys from Ritchie Bros. are really a first class operation. They did all the preparation, lined up my equipment and built an auction ramp; the flags were flying and extra gravelwas brought in. Ritchie Bros. really went out of their way to make this sale a success.To liquidate, you need an auctioneer that will take care of every detail and that's what they did."

Ritchie Bros.' ability to successfully market and sell all of his equipment allayed any fears Donald might have had about selling unreserved.

"Well, you never really know until the 'gavel' falls how you will do on auction day," says Donald. "But the reason I chose Ritchie Bros. to liquidate all my equipment is because they know the pipeline industry.They advertise to the right people and reach the right buyers...If I had to sell all this myself, it would take me five years!"

And the buyers did come - from all over the world. Hundreds of people from 10 different countries registerd to bid on more than 650 items. At the end of the day, everything was sold. Donald says the bidders came prepared to pay good money- and they did.

"I wasn't surprised at the number of people that came, but was a bit shocked at where everyone came from," says Donald." One guy was here from India, that really surprised me. And people from the U.K. bought the bigger booms, which was good. My lowboy trailers sold quite well too.The sale came out exactly how I expected. I had good equipment to sell and Ritchie Bros. brought in the buyers.''

Although Donald is looking forward to retirement, he doesn't think that'll be the end of his relationship with Ritchie Bros.

"Ritchie Bros. is a class act. All of their people know what they're doing," he says. "I've known some of the Ritchie Bros.staff for quite awhile and we're friends now. This isn't the end."