Dean Stockman grew up on a farm in Saskatchewan, but it wasn't until he took over the farm from his father that he started buying equipment from agricultural auctions.

When Dean wanted to sell a single sprayer, he chose the local service and global reach of a Ritchie Bros. auction.

Now you can sell just one or two pieces of equipment at the auction site and reach buyers from all over the world. 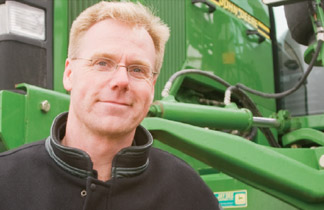 Like many kids born and raised in a small town, I wanted to get out as soon as I graduated," laughs Dean. He moved to Edmonton, Alberta in the mid-1980s and established a career as a paramedic, returning to the family farm every year to help his father with seeding and harvesting.

But in the late 1990s Dean went back to his roots, completing an agricultural business degree and taking over the Beechy farm, which he doubled in size to 5,500 acres. The expansion meant Dean needed to purchase extra farm equipment, which he sourced through advertisements, dealers and auctions.

"Farmers want to know that they're paying a fair price," says Dean. "I'll buy used equipment if I can. The most important thing is finding what you need at the price you're willing to pay. That's why I like unreserved auctions."

Dean bought a few pieces of equipment over the internet from Ritchie Bros. auctions in Edmonton in the early 2000s. He was happy with the service he received, and pleased with his purchases – but he still preferred attending local farm auctions in Saskatchewan, especially auctions conducted by Clarke Auctioneers, a family-run company based just outside Regina.

Dean became a first-time Ritchie Bros. consignor in April 2008, selling a 2001 John Deere sprayer at a multimillion dollar auction at the Saskatoon auction site. The auction featured equipment from almost 200 consignors and attracted more than 2,400 bidders from around the world. Equipment was sold to people from as far away as Australia and Germany.

"We've got the best of both worlds now – the global advertising and reach of Ritchie Bros. with the local service from the ag team," says Dean. "Ritchie Bros. staff are professional

and down-to-earth; they know their stuff and they're good to talk to. I only sold one sprayer in the auction but I got the same treatment as someone selling millions of dollars of equipment. And I sold that sprayer for more than I could have anywhere else. I'm happy with that."

"My dad Edward and I met Darren and Jordan Clarke and their dad Grant through our common interest in collecting and restoring antique tractors," says Dean. "What I liked best about working with them was that they were very professional and they had the personal touch. They took the time to get to know me."

"We used to think that auctions were only for people who were retiring and selling the whole farm – land, equipment, everything," says Dean. "That's changed with Ritchie Bros. Now you can sell just one or two pieces of equipment at the auction site and reach buyers from all over the world."