When Dean Stines started an excavation company in California, he turned to Ritchie Bros. for his equipment needs.

When new environmental regulations accelerated Dean's retirement plans, he returned to the place his business began: a Ritchie Bros. auction.

I couldn't afford to update my equipment and be in compliance. I just couldn't do it. 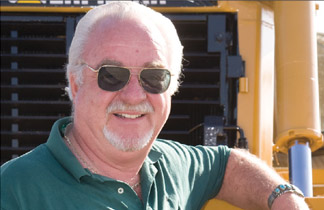 In 1992, when Dean Stines and his father Les started D & L Stines Construction – an excavation company in Santa Paula, California – they needed one thing: equipment.

"I knew Ritchie Bros. by reputation," says Dean. "I'd heard about their policies: no buy backs, no minimum bids, no sale without clear title. I knew they had ethics, and I knew that when something was put up for auction it would be sold to a new owner. I liked that."

Dean purchased four pieces of equipment at his first Ritchie Bros. auction in Los Angeles: a skip loader, a roller, a dump truck and a tilt bed trailer. "I kept that tilt bed trailer right to the end," he says. The trailer came full circle when Dean sold it at another Ritchie Bros. auction in Los Angeles – 15 years later, as part of a complete dispersal for D & L Stines Construction.

"I'd had a good run in business," says Dean. "I'd taken care of my parents, I'd set our family up for life. I worked 18 hours a day for 15 years to keep this business running and it was time to retire."

"My machines were of the older vintage. They were good machines, well-maintained, running clean – but they didn't comply with the new regulations," says Dean. "I couldn't afford to update my equipment and be in compliance. I just couldn't do it.

"Some of my equipment went to Mexico, some went back east," says Dean. "Having buyers at the auction from other regions definitely helped with the prices, especially now, with the economy and regulations affecting the equipment market in California. I was happy with the results we got. If I had to do it again I would do it exactly the same way."

Now retired, Dean still listens to Ritchie Bros. auctions online – "I miss them," he laughs – and his ties to the staff in California are just as strong. "Money can't buy relationships like the ones I have with the people at Ritchie Bros.," says Dean. "They treat me with respect, they're honest and professional. I trust them."

After 15 years buying and selling equipment at Ritchie Bros. auctions, Dean knew which company he wanted to sell his entire equipment inventory, which now included dozens of motor graders, motor scrapers, wheel loaders, wheel dozers, crawler tractors, water wagons and compactors. "I figured that Ritchie Bros. had the best advertising going, so I was giving it the best shot by going with them," he says. Even more important: the professional service and respect he received from the Ritchie Bros. staff.

"Making the decision to sell out was very difficult and emotional," says Dean, "but Ritchie Bros. understood that. They knew what I was going through. This business had been my life for 15 years. Ritchie Bros. sells larger equipment packages for bigger companies all the time, but they took my business and my concerns seriously. That meant a lot to me." In November 2007, Ritchie Bros. sold the entire equipment inventory of D & L Stines Construction at an unreserved auction in Los Angeles that attracted more than 2,400 bidders from 35 countries.