Dave MacDonald was born to run equipment. He was operating dozers as a teenager and operating his own British Columbia-based construction company by his twenties.

Deciding to sell was hard for Dave – but it was easy to decide on the right dispersal method.

The buyers are there and that's what gets you the very best money for your equipment. 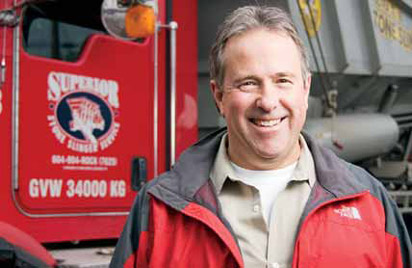 Dave MacDonald was not your average 1970s teenager. While his friends were playing baseball and going to sports camps, he was attending Ritchie Bros. auctions with his dad Angus and working summers at a mining camp on Vancouver Island, British Columbia. "My dad ran an open-pit mining contracting business," says Dave. "I was like a little boy with big toys. At 15 I was operating D8 Cats and driving 35-ton trucks. I loved it."

At 16, Dave invested his summer earnings on a brand new Mach 1 Mustang. "I was the most popular guy in school," he laughs. After graduating from college, Dave made a longer-term investment – in a rubber-tired backhoe, which he operated at construction sites around Vancouver. Before long he had five backhoes and five guys to run them – but it wasn't until he acquired a Cat 966 wheel loader and a D6 dozer that he entered, in his words, "the big leagues."

In the late 1980s Dave Taylor joined Dave in Dayross Developments. They started bidding on large infrastructure projects and soon had upwards of CA$25 million (US$20 million) worth of work on the go – including some of the most notable road and highway projects in British Columbia. But success came with a price.

"I was close to burned out," recalls Dave. "Work had taken a toll on my family and my health and there were no more big projects in the pipeline. I had done well financially and I was ready for a change. I decided it was time to get out; to sell."

Dayross had millions of dollars of equipment in its inventory; dozens of dozers, scrapers and excavators represented the company Dave had built from the ground up. "Making that decision to sell was hard," he says.

Making the decision to sell through Ritchie Bros. was a lot easier. "Contractors like us need their services," says Dave. "We have alternatives: other auctioneers, other methods of selling. But selling privately takes time and energy; it takes us away from what we do best. And we've always had good results with Ritchie Bros. The buyers are there and that's what gets you the very best money for your equipment."

Ritchie Bros. conducted a complete dispersal for Dayross in 1992. Dave then took a six-year hiatus in Arizona before returning to Vancouver and buying into King Kubota and later acquiring Superior Stone Slinger Service, the area's premier stone slinging operation. Business has been "fantastic," says Dave. He and his partner Andrew Kettner now have about 30 employees, a dozen excavators and a dozen dump trucks and slingers.

Dave and Andrew still turn to Ritchie Bros. when they need to buy or sell used equipment. "Ritchie Bros. always has a huge list of inventory, so we don't have to look far to find what we need," says Dave. "And when we sell we just make a phone call – and that's it. Adam comes out, does an appraisal, takes photos, organizes the title search and gives us a date to have everything down at the auction site. The professionalism and the service make it easy for us."

Over the years Dave has developed strong relationships with many Ritchie Bros. staff, including Dave Ritchie, one of the cofounders of Ritchie Bros.

"Dave has always treated me like gold," says Dave. "He's larger than life and one of the hardest working men I've ever known, and he's surrounded himself with people like him. I've been to Ritchie Bros. auctions all over the States, Canada and Mexico, and the employees are all of like nature, from the yard guys right up to the top. Dave has retired but Ritchie Bros. is the same."