Bryan Gour runs an excavator rental and parts business in Greater Vancouver, B.C. that was established by his late father-in-law Jim Blanche.

When Ritchie Bros. celebrated its 50th anniversary, Bryan made sure he was there – not just for himself, but for Jim too.

Ritchie Bros. meant a lot to him; it's part of our history. 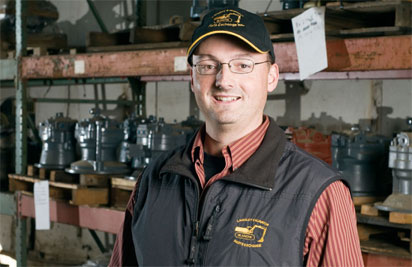 Bryan Gour has many fond memories of his late fatherin-law Jim Blanche. Among them: bidding at Ritchie Bros. auctions – over breakfast. "We'd be frying up eggs and bacon in Jim's kitchen, with the speakers turned up on the computer in the background," recalls Bryan. "We'd listen to the auctioneer and then run over and bid when the piece we wanted came up for auction."

After years as a Cat equipment salesman, Jim decided to "strike out on his own" in 1977. He established Blanche Equipment Sales Ltd. in Langley, B.C. to buy and sell used heavy equipment. The company evolved over the years in response to the changing needs of its customers; by the late 1980s, it had begun to specialize in the sale and rental of hydraulic excavators, which was fast becoming "the versatile, Swiss army knife of the local construction market," says Bryan.

Bryan came on board in 1991. He was in university at the time, dating Jim's daughter – now his wife – and always thought he'd follow his own father into the corporate world. "One day Jim says: why don't you come and work for me for the summer and I'll show you what the real world is all about?" recalls Bryan. "And here I am now, 18 years later."

Jim had been a Ritchie Bros. customer for as long as he'd been in business; he'd become close friends with many Ritchie Bros. employees, including company cofounder Dave Ritchie. Some of his earliest purchases – when he was struggling to get Blanche Equipment off the ground – were made at Ritchie Bros. auctions. When Bryan joined Jim at Blanche, the two attended auctions together. "When you're in the equipment business, that's what you do; everyone goes to Ritchie Bros. auctions," says Bryan.

Over the years, Jim and Bryan have purchased millions of dollars of equipment from Ritchie Bros. auctions. Today Bryan does most of his buying online: he can stay in the office and keep one eye on the computer, bidding when he sees the right machine going for the right price.

"I like buying from Ritchie Bros. because they have a very clear, consistent and transparent system," explains Bryan. "You know what to expect and how the auction is going to be run: it's the same every time. As a buyer, you want to be sure that no games are being played behind the scenes, especially if you're not bidding in person. I feel confident buying from Ritchie Bros. because I trust them."

That trust, says Bryan, stems from two things: a reputation built over 50 years in business and his own experience with the company.

"We do business with a lot of companies, but it's different with Ritchie Bros.," says Bryan. "There's a friendliness, a camaraderie with Ritchie Bros. – it's more than just business. I think that comes directly from Dave Ritchie himself. He's set the tone of the company. I've met him twice, three times – and he remembers my name. At Ritchie Bros. I feel like my business is valued, that I'm valued."

Blanche Equipment recently broke ground on a new permanent facility in nearby Surrey. The building is specially designed for the used parts business, Langley Excavator Parts Exchange Inc., which is the company's current focus. Unfortunately Jim passed away in May 2007 and will miss the grand opening in spring 2009. "This is something we talked about doing for a long time," says Bryan. "I wish he could be here to see it happen."

"Jim hated flying so he bought a motor home to travel in," says Bryan. "I don't think it's ever had a destination other than a Ritchie Bros. auction so it was only appropriate for my wife and I to take it to Kelowna. I wanted to catch up with all the different Ritchie Bros. people I've gotten to know over the years but I also went for Jim. I know he would have wanted to be there. Ritchie Bros. meant a lot to him; it's part of our history."