Bob and Doug started selling their equipment one piece at a time – until someone suggested an easier solution: a Ritchie Bros. auction.

We were working 23 scrapers and moving three million meters of dirt a year. 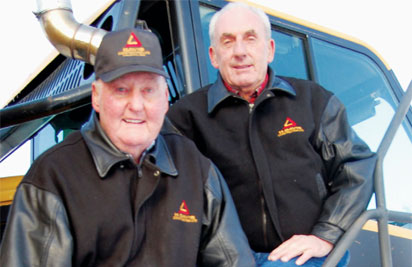 When Bob and Doug Davis decided to retire, their Toronto-based earthmoving company had a multi-million dollar fleet of equipment in its inventory: motor scrapers, articulated dump trucks, crawler tractors, hydraulic excavators – and more. When their father Herbert established H. Davis Construction in 1949, he began with just one TD14 bulldozer. "We were earthmovers from the outset," says Bob.

Herbert started out digging farm ponds. His three sons – Doug, Tom and Bob – joined the business in the 1950s. Doug's son Brian officially came on board in 1995, "but he'd worked for us ever since he was big enough to climb on a machine," laughs Bob.

As business developed, Herbert invested in more earth moving equipment: tractors and scrapers, more dozers. The company acquired its first motor scrapers in 1962. In 1967, the brothers bought their dad out. Over the coming decades they took on increasingly larger earthmoving projects for local governments, gravel pit owners, a brick manufacturer and golf course developers.

Rapid growth came in the mid-1990s, when H. Davis started to do site preparation for new home developers. "We didn't sell any equipment over the next ten years – we just bought it," says Bob. "We were working 23 scrapers and moving three million meters of dirt a year." Their preference: late model equipment "that you can put straight to work" from dealers or Ritchie Bros. auctions.

By 2007, after almost 60 years in business, H. Davis was one of the region's largest private earthmoving companies. Bob and Doug decided it was time to retire; their brother Tom had passed away in 1995. "We weren't getting any younger," says Bob. "It was time to enjoy life. I'd only had one summer vacation since high school: my honeymoon!"

Another factor: a slowing market. "We knew it was time to get out," he adds. "The new housing market in this area had peaked and we hadn't diversified. We were a scraper company."

Bob and Doug made the decision to retire in June 2007; they wanted everything wrapped up by year's end. They let everyone know they were selling out and sold a few pieces of equipment privately – but it was slow.

After talking to Marv Chantler, a retired Ritchie Bros. employee they'd known for many years, they decided to sell the rest of their equipment at a Ritchie Bros. auction.

"If we did it all over again I'd go with Ritchie Bros. at the start and sell everything as one package – it's so much easier," says Bob. "Once we signed the deal we knew when everything was going to be sold at a fair market price, so we could settle up and move on."

Ritchie Bros. conducted a complete dispersal for H. Davis Construction at a Toronto auction in December 2007. The $26 million auction attracted bidders from 31 countries; several generations of the Davis family came to watch. "Equipment went to Europe, South America, all over Canada and the States, but that didn't surprise me," says Bob. "These days you can move equipment all around the world. Ritchie Bros. understands that; they don't just look at the local market. They get more bidders from more places – and the more competition there is, the better the prices."

Auction day created mixed emotions, says Bob: it marked the end of an era but the start of a new chapter for the Davis family. Interestingly, a neighboring company bought several H. Davis motor scrapers and crawler tractors at the auction. "It makes me nostalgic when I see those scrapers down the road," says Bob. "But we had a good run. I'm enjoying my retirement now."