Over the past 45 years, Robert, David and James Cooke have built Jemstar Farms into one of the premier cattle farming operations in Ontario.

Now looking to retire, the Cooke brothers have chosen Ritchie Bros. to help them make this transition.

It was clear that Ritchie Bros. was the only auction company that could manage the sale. 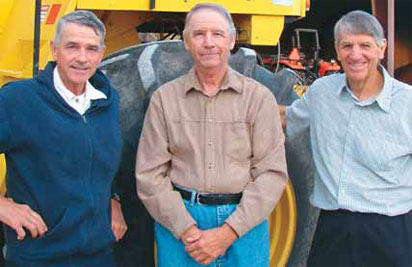 Farming has been a way of life for three generations of the Cooke family. Robert, David and James grew up on their parents' farm in Bradford, Ontario; their dad was raised on a farm in Québec's Eastern Townships. When Bob and Dave left school in the early 1960s they continued the family tradition, buying 300 acres of farmland in Walkerton, Ontario and establishing a cattle-farming operation, Jemstar Farms. Younger brother Jim joined them in 1972 after graduating with a degree in agricultural engineering.

Over the coming decades, the brothers were in expansion mode. "We bought a neighboring farm or so every year," says Bob. "We'd clean up the land, do the fence work, install tile drains, improve the soil – get it ready for farming." The brothers' farm grew to 2,100 acres, including a beef barn with room for 3,000 head of cattle and fields of crops to feed them. "We've run a pretty self-sufficient farm," he says.

Now in their 60's, after 45 years of running Jemstar Farms, the Cooke brothers are ready to retire.

"Farming has been a good life; it's been good to us," says Bob. "There's always something new to learn and we've enjoyed the challenges. But a few years ago we decided it was time to move on to the next phase in our lives, to slow down. You can't half-farm: you have to commit to it 100 percent. I'm looking forward to traveling, doing different things with my time."

None of Bob, Dave or Jim's children were interested in taking over the farm, so the brothers decided to sell. Adjoining farms purchased separate parcels of Jemstar farmland. As for the equipment?

"We went to different auctions and talked to people who'd sold equipment by auction," says Bob. "We'd never really dealt with auction companies in the past: we typically bought new or used equipment from dealers and traded it in when we wanted to upgrade."

Despite never having bought or sold at a Ritchie Bros. auction in the past, the Cookes contacted Ritchie Bros. and discussed their options for selling. "All the farmers we talked to who'd used Ritchie Bros. were very happy with the experience," says Bob.

"Everyone said they did a first rate job – covered all the bases." Making the final decision to sell all of their equipment through Ritchie Bros. was easy.

"It was clear that Ritchie Bros. was the only auction company that could manage the sale," says Bob. "Some of the equipment is large and not suitable for local farms, so we needed a company that could reach buyers from afar. Ritchie Bros. has the expertise to handle every aspect of the sale – from the advertising to the auction itself – and they get you broad exposure with their advertising."

In March 25 2009, Ritchie Bros. will conduct a complete dispersal for the Cookes on the Jemstar Farms property in Walkerton – the company's first on-farm auction in Ontario. Among the 130+ items being sold: a large selection of tractors, seeding equipment, trucks and trailers, forage equipment and highly specialized manure handling and nutrient management equipment. In the weeks leading up to the auction, everything will be lined up and displayed at the farm, where interested buyers will be able to inspect the equipment before bidding on auction day – either in person at the farm or over the internet.

"We're pretty confident about the auction," says Bob. "We feel like we're in good hands. Ritchie Bros. has so much experience; they know what they're doing. We don't know what everything will sell for, but it will all be over at the end of the day; everything will be sold. You get the best you can on the day. We're looking forward to the auction – and we're really looking forward to retirement."