Bob Anderson and Phil Johnson started an underground services company in the late 60s and spent the next four decades laying pipeline across California.

When Bob and Phil retired in 2008, they sold everything – but that won't keep Bob away from auctions. 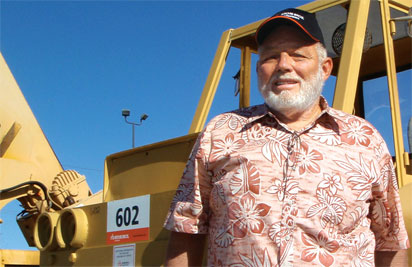 Sometimes when people sell their items in a complete dispersal auction with Ritchie Bros. it's because they have to sell; they need the money. But for Bob Anderson and his business partner Phil Johnson of Desert Pipeline of Thermal, California, that wasn't the case.

"We've been in business close to 41 years, and looking at what was going on in the economy it looked like a good time to start relaxing," says Bob, age 70. "It wasn't mandatory for us to sell; it was just the right time."

As an underground sewer, water and storm drain contractor, Desert Pipeline laid a few million feet of pipeline in California. As Bob and Phil completed their final jobs, they started to look at options for selling their large fleet of equipment.

"We asked Ritchie Bros. to do an appraisal of our equipment, all 116 items," says Bob. "That appraisal turned into a deal we could not refuse. Ritchie Bros. was able to guarantee us a certain dollar amount for our equipment, and we felt comfortable with that. If we'd had to sell everything ourselves, it would have taken two or three years. This way it's all sold at once in a good, clean way."

In November 2008, Ritchie Bros. conducted a complete dispersal for Desert Pipeline during an unreserved public auction at its Los Angeles auction site. Even though Bob had been a Ritchie Bros. customer for decades, his experience had been primarily on the buying side.

"Over the years, I have bought way more equipment than I have ever sold," says Bob. "I'm really an auction junkie at heart. I used to go to all sorts of auctions, but in the past decade it's been mostly Ritchie Bros. – I just feel they're the best."

Bob has attended Ritchie Bros. auctions across the Western United States, including Albuquerque, Phoenix, Las Vegas, Denver and Olympia as well as nearby Los Angeles. "Even if I didn't need equipment, I'd still go to auctions," he laughs. Bob remembers when Ritchie Bros. used to hold auctions "in the middle of nowhere."

"It's so different from the old days," he says. "It used to be you'd have a field and stack in the equipment. Now, the Ritchie Bros. auction production is just great. It's so organized and well run. It's a classy auction. No reserve. It's straight. It's just a much more pleasant situation than anything I've ever seen."

And even though he is selling his equipment, the thought of missing an auction doesn't even register: "Oh, I'll keep going to the sales!"

And Bob has passed along his love of Ritchie Bros. auctions to one of his sons who runs a construction company in Colorado. "I've got him hooked on auctions too now," says Bob proudly.

And even though he was selling a lot of history in the 116 items – including the first crane he purchased, in 1976 – he doesn't seem too attached. "I won't miss the equipment," he chuckles. "It could be we end up being a suitcase contractor – doing jobs here and there in the future. Guess that means I'll be back buying equipment at Ritchie Bros. auctions."

And that is what he looks pleased about: the fact he'll be back.